Yesterday was our wedding aniversary – another milestone! It is also the anniversary of my parents’ wedding, and that always gives me cause to remember especially Dad who passed away in 2000. And remember that Mum still grieves and misses him deeply.

Remembering Dad also reminds me of the generations of Irish ancestors who lived in this country and who emigrated to Australia after the famine and later in the nineteenth century. Some may even have walked the streets of Dublin, and been aware of the suffering of the very poor – indeed may have been experiencing that poverty into which Ireland had descended.

Our journey on this pilgrimage has given us much time to reflect on the history of the Irish, and of those who decided to emigrate. No doubt emigration was a major decision, to leave the places and people you loved, but the options here were not great, especially for women.

As we have walked around the streets we have been aware of the other anniversaries which Ireland will be celebrating over the next few years, beginning this year with the anniversaries of the Titanic, which in many ways marks the beginning of a series of anniversaries which commenorate aa century since the Easter Uprising in 1916 through to Civil War and separation of the north and south. 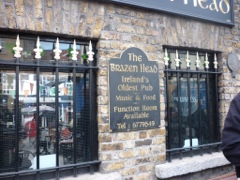 I'm a pilgrim, a traveller, a tourist! I'm on a journey of life, and my life is like a rich and varied garden, with new growth, blooms and even some weeds which I keep trying to eradicate! I'd like people to read my blog and feel positive about life and the earth we share. The world is a place of good news stories and experiences we can share.
View all posts by Judith Gardiner →
This entry was posted in Travel. Bookmark the permalink.